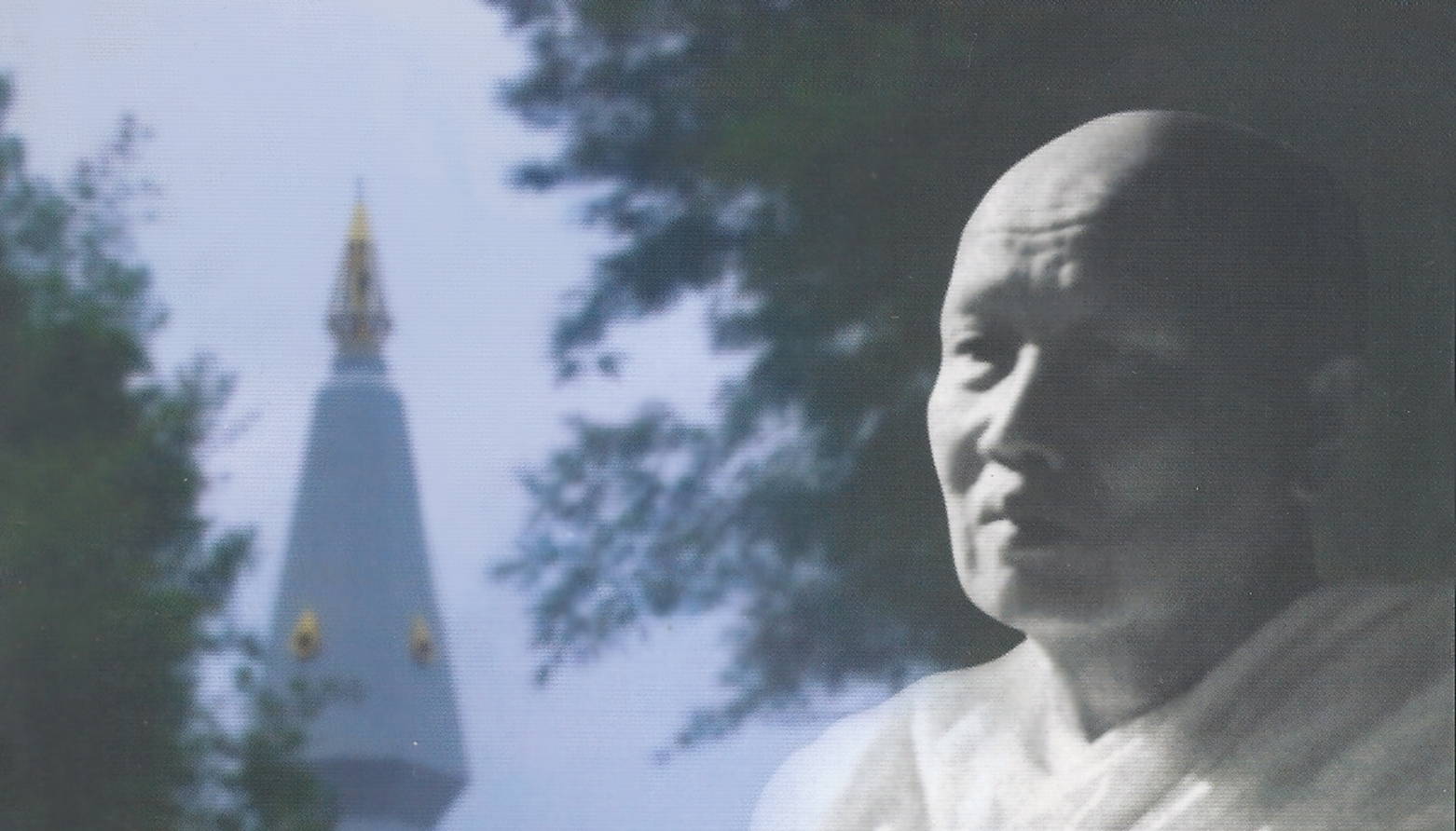 If you neglect to cultivate your inherent mindfulness & wisdom, striving only half-heartedly, the obstacles in your path will multiply until they block all sight of the way, leaving the end of the road forever in darkness.

A delicate aroma of the Jasmine flower floats in the air, the gentle sound of lapping water rises from the lily pond. In the midst of this tranquil garden is a woman meditating…

My Ponderer scented candle is based on the pure and enlightened Mae Chee Kaew; Monk of the Thai Forest tradition. The Ponderer candle honours the radiance & gentle spirit of Kaew and serves as a reminder that we must take time to reflect inwards & enjoy moments of tranquility.

Now, settle into your most serene setting because we are about to embark on a journey of enlightenment, perseverance and triumph…

Mae Chee Kaew was the youngest & fifth member of her devout Buddhist family. The start of her young life was not easy, for at the young age of 5, her mother sadly passed away, leaving Kaew with just her father and four siblings. Kaew struggled to adapt to their new family of 4 and found life without her Mother to be lonely.

At around the age of 7, Kaew began to sense that she wasn’t quite the same as everyone else. She discovered that she was able to communicate with ‘invisible beings’ and was experimenting with other unusual communication skills which lay within the psychic realm.

Kaew found that she was able to communicate with celestial deities, sometimes more commonly known as Gods/Goddesses or ‘nagas’ which are mythical, semi-divine beings that are half-human and half-serpent. She was even able to communicate with various animals and the ‘hungry ghost’ of Buddhist cosmology! At the tender age of 7, this experience for Kaew was profound but also rather scary. Soon, Kaew was also invited to visit those deities in their heavenly kingdoms which gave her the opportunity to see the past lives of these beings..

Kaew was thrilled by her new-found gifts and was keen to explore & develop them more. Her father however, did not approve. In a bid to put an end to it, he demanded that she stopped practising and asked that she no longer talked about her experiences in the family home.

AN INTRODUCTION TO MEDITATION

Kaew lived on the Alms and she would watch intently as the Monks went about their daily routines. She would kindly offer them food when they were passing by and became intrigued about their way of living. They seemed to be so beautifully peaceful & content.

In 1917, Kaew devised a plan to speak to ‘Ajahn Mun’ when he came to visit the Monks who lived near her. See, Ajahm Mun was the great master of the forest tradition and he would be able to guide her in her spiritual awakening.

It didn’t take long for Ajahn Mun to realise that Kaew possessed extreme psychic abilities and great spiritual potential. So, he decided to give Kaew a chance. Mun guided her and gave her strict instructions to follow when she was practicing meditation. Even though she was still very young, he observed that she was able to ‘absorb her ego’ for many, many hours. This was considered a great feat for any practising Buddhist, let alone a beginner.

Ajahn Mun was an 'Arahant' meaning that he had experienced nirvana and had gained insight into the true nature of existence. As an Arahant, Mun was able to truly judge Kaews skills & physic phenomena.

When Kaew had reached 16 years of age, Ajahn Mun told her that he would accept her as his disciple. This was incredibly rare for a woman of such a young age! Ajahn Mun also asked Kaew whether she would consider joining the ‘Mae Chee’. May Chee were the enlightened Buddhist laywomen in Thailand who had dedicated their lives to spiritual enlightenment and religion. It was a great honour to be invited to be a renunciant of the Mae Chee and Kaew was delighted. After all, this was everything she had dreamed of since she had been a young girl!

Sadly, and much to Kaew’s disappointment, her father would would not grant his consent. This was futile. For, without the approval of her father, Kaew was unable to join the Mae Chee and Ajahn Mun was forced to ask her to stop meditating. Without a qualified teacher to guide her, the incredible abilities that Kaew possessed could lead to trouble and possibly even harm. So, Ajahn Mun also informed her that she must wait for another master to guide her in her journey to spiritual enlightenment before she could resume her practise.

Thing’s were now looking rather bleak for Kaew…

Without meditation, a master, or her fathers consent, Kaew was lost and bewildered. It seemed as though things couldn’t get much worse, but it turned out that they could…

When Kaew turned 17, her father advised her that she needed to marry. She had known that this day would come and so she begrudgingly obliged. A ‘suitable’ husband was found by her father and soon Kaew became a wife. However, Kaew was not happy in the marriage. Her husband was often unfaithful but Kaew had made a commitment which she was forced to honour despite his infidelity.

It soon also became apparent that Kaew was unable to conceive a child of her own. However, in a bid to grow the family unit, the couple decided to adopt a daughter from a close relative, taking their small family from 2 to 3.

Despite her new family life, Kaew’s thoughts often drifted to the spiritual path that she had left behind. She tried to cast the thoughts aside, but they persisted. She became restless with the knowledge that something profound was missing from her life. Deep down she knew that she needed return to her journey of enlightenment, but how?

After months of pleading, Kaew’s husband finally gave his consent for Kaew to partake in a 3 month meditation retreat. Kaew was ecstatic! Finally she was being given the opportunity to live the life that she wanted so desperately. By the time the meditation retreat was over, Kaew’s spiritual calling had been reaffirmed to her and so she re-embarked on her journey to enlightenment.

At the age of 37 and after 20 long years in an unhappy marriage, Kaew finally filed for divorce. Of course this wasn’t going to be easy, and true to her expectations, her husband would only be willing to comply with the divorce if she agreed to give him all of her belongings. Kaew had no hesitation, she wanted out! She handed over everything she owned and before making sure that her daughter had full care. Then, she finally left to renounce.

Kaew was finally on the right path… The one that she had always dreamed of, the path to enlightenment. Once she renunciated, Kaew was able to practice meditation with many different Bhikkhus (Buddhist Monks). This made it a possibility for her to receive a 20-acre plot on which she could build a site to practice.

Remember when Ajahn Mun said that Kaew needed to wait for a new master? Well in 1951 when she'd reached 50 years of age, a Arahant named ‘Ajahn Maha Boowa’ arrived in her home village.

Mae Chee Kaew saw this as a sign and approached him. To her great delight he agreed to become her new teacher! Just like Ajahn Mun, Ajahn Maha Boowa recognised her great potential. But unlike Mun, Haha Boowa was not concerned about Kaew’s attachment to physic phenomena. Instead, he gave her some advice. He Told Kaew to instead reflect all of her energy inward and to start studying the nature of her own mind & body.

After taking Ajahn Maha Boow’s advice, Mae Chee Kaew began to encounter new & strange experiences. She was having visions of lights and felt a great vastness within herself, almost as if she were an empty vessel. Kaew was delighted and mistook these sensations for Nirvana. Ajahn Maha Boowa quickly put an end to this belief. He made it clear that this was not Nirvana and discouraged her from practising in this way.

Disheartened by this news, Mae Chee Kaew entered a long and pressuring silent retreat. During her time here, she practiced everything to the utmost detail and to the very best of her abilities. She had very little sleep, and some days she barely ate any food. But she persevered, believing that the outcome would be greater than she could have ever imagined.

After some time, Kaew was able to identify the falsity of ‘forms & thoughts’ which then enabled her to ‘break down the self’. Towards the end of her time at the retreat, Kaew began to feel a bright & exceptional radiance within her.

After more practising and by the time the silent retreat was finally over, Mae Chee Kaew had managed to achieve the goal she had been working towards for her entire life; she had experienced Nirvana and had even recalled her past lives!

By now, Kaew felt truly enlightened & complete and was a respected Mae Chee. Many had witnessed her incredible gifts; reading minds and healing the sick & wounded. She was even able to predict events.

When a momentous drought struck her town, the residents were thirsty and unable to retrieve water. Kaew summoned all of her abilities and meditated in the hope that she might have a vision which would save them. Her gifts didn’t fail her, by following her visions, Kaew was able to lead the monastic community to a hidden source of water!

Every thing & every one must come to an end, and for Mae Chee Kaew this was approaching. In 1977, she was diagnosed with pulmonary tuberculosis, diabetes and cancer. Although she and others around her were not sure how long Mae Chee Kaew had left, she continued to live her life for another phenomenal 14 years, reaching 90 years of age in 1991.

Following tradition, Kaew was cremated. Those who attended the cremation claimed that Kaew’s bones turned into the shapes of pearls & crystals and shone with a variety of beautiful colours. This was the final proof to others that Mae Chee Kaew had reached… Arahantship.

The legacy of Mae Chee Kaew continues to inspire the future generations of young Buddhists. She proved that persistence is fundamental when it comes to achieving your dreams and that reaching Arahantship is not impossible for men nor for women, even in the modern days of society.